I wonder if you’ve ever stopped to consider the news?

That’s an odd question to ask but in recent years the format of what news is, against what it potentially should be, has changed a lot. A quick Google search for the definition of news tells us that it’s:

“A person or thing considered interesting enough to be reported in the news.”

News is something that surrounds our lives. It’s what allows us to stay connected to the world around us; whether that’s within our families and circles of friends, or something that’s happened internationally. It’s also taken on lots of different forms; local news, regional news, national news, international new, showbiz news, music news, business news… the list goes on and on, and that’s no bad thing. People that want a specific subject can get it at the touch of a button or on a 24 hour rolling news channel on TV.

The thing I’d like to get to the bottom of though, is what exactly is news in 2016?

Originally, news existed to report the sensational things that have happened in the world today; ground breaking stories that could change the course of history; or writing about the things that people didn’t want the rest of the world to know about.

Today that idea still exists, but in a very different concept. On the week that I write this, some of the stories I’ve seen that are be deemed to be news are:

I’m aware that I’ve picked out three items that are clearly trying to grab headlines and ratings, and I’m not ignoring that there’s been a stabbing in London and trains are going on strike in the south of England, but all these items made the news in some form on TV, radio, online and in the papers. 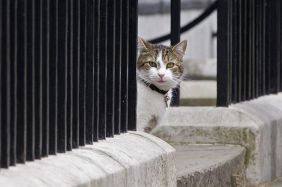 At the heart of it, I question what is it about those stories that deem them worthy of them featuring in the news at all, and how have they got so much coverage?

Why didn’t the story about a charity worker for an international aid organisation who allegedly syphoned off 35 million pounds get more coverage than a full page article about Orlando Bloom?

How is it that a woman living in a drought ridden country, who has to pick at ants nests in order to feed her family goes unnoticed?

While I’m not saying that stories about the Downing Street cats isn’t something to highlight in a world of doom and terror right now, I do believe that we should begin to reconsider how many column inches we choose to read about them.

One thought on “Extra, EXTRA… read all about it!”